This is the first half of the information presented by Stella Shamo at the John D. Lee reunion held September 2007. 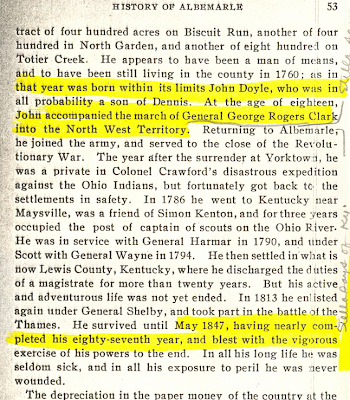 This is an example of combining together information on at least two John Doyles who served in the military during the Revolutionary War. The information that refers to the John Doyle, ancestor of John D. Lee is:

"as in that year (1760) was born within its limits, John Doyle who was in all probability a son of Dennis. At the age of eighteen, John accompanied the march of General George Rogers Clark into the North West Territory. Returning to Albemarle he joined the army and served to the close of the Revolution."

The rest of the information pertains to one or two other John Doyles.

Stella knew that Illinois was part of the Northwest Territory and many of the records for the area are in Indiana. Stella wrote to the Indiana State Library regarding military records. She received a letter back telling her that they didn't have the staff to do the research she needed. But they made an exception to her request because they had recently celebrated the bicentennial of George Rogers Clark capture of Vincennes in Indiana.

According to materials submitted to the library by Lt. Col. John A. Doyle of Cincinnati, Ohio, it appeared that there were two John Doyles who served with George Rogers Clark and Col. Doyle had separated them out.

"One signed his name John Dyal, but persons referred to him as Doyal. He was born in Winchester County, Virginia in 1762 and died in Lewis County, Kentucky in December 1845. This person appears to have been more involved in Clark's Kentucky campaign."

"The Doyle that settled in Illinois was probably born on the Doyle's Branch of Moorman's River in Albemarle County, Virginia. His father was Dennis Doyle who was an extensive land owner."

After receiving this information Stella wrote to Lt. Col. John A. Doyle. She was so disappointed to learn that Lt. Col. Doyle had died two weeks before receiving her letter!!

The person who responded to her letter was Dean A. Doyal of Virginia. He was an avid Doyle genealogist who volunteered at the Newport News Family History Center, although not a member of the Church of Jesus Christ of Latter-day Saints. He had done a lot of research on Doyles and the derivatives of the Doyle name, and published a Doyle newsletter. It was through corresponding with him that Stella was able to separate the military records of John Doyle of Illinois and Dean Doyal's ancestor, John Dyal/Doyal of Kentucky. She received the following information from Dean Doyal about his ancestor. This information came from pension application records.

Stella also sent a letter to the Virginia State Library requesting military information on John D. Lee's grandfather, John Doyle. She received two certificates of service, one showing that John Doyle served as a private in Captain Mark Thomas' Company in the Illinois Regiment. Capt. Mark Thomas recruited soldiers from Albemarle County and was one of the captains under Col. George Rogers Clark's command.

Pension applications are a valuable resource of information, but John Doyle, John D. Lee's grandfather died before he could apply for a pension. His wife preceded him in death so she didn't apply for the pension either. After John D. Lee was a grown man, he and Charlotte applied for a pension on behalf of John Doyle, but his petition never left the committee. Through research done by Stella Shamo and Renee Durfee we have been able to piece together the following information on John Doyle:

Through the help of Lt. Col. John A. Doyle and Dean A. Doyal and Stella's research we have been able to clarify John D. Lee's grandfather's involvement in the military, which helps identify who he was and where he was more clearly.

These are two of John Doyle's records from the National Archive now found on microfilm at the FHL. Both show service in Clark's regiment serving in Illinois.