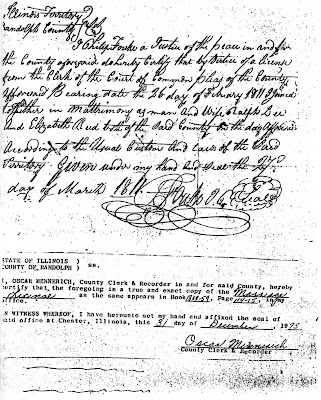 In some instances of Family Search, Ralph's wife has incorrectly been identified as Sarah Elizabeth. This information probably came from Nauvoo Temple Index records. *2 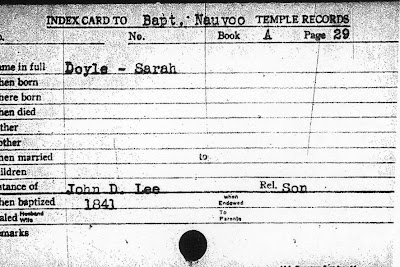 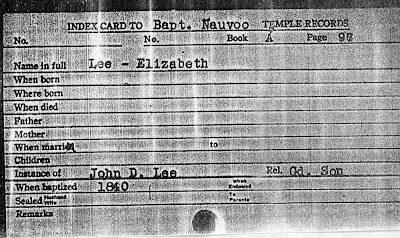 This card states that John D. Lee is Elizabeth Lee's grandson.
The temple records show that John D. Lee was baptized for his "mother," Sarah Doyle. In addition they show that he was baptized for his "grandmother," Elizabeth Lee. The information regarding relationships was entered incorrectly. This was not unusual for this period of time and under the circumstances, understandable.

John D. Lee's soon to be published1840 journal gave the information as it should have been recorded. On page 112, John D. Lee listed his deceased relatives for whom he was baptized. "Firstly my mother Elizabeth Lee. Grandfather John Doye (sic) Grandmother Doye (sic) Aunt Sarah Doyle, and Father, R Lee."*3 The information on Ralph was missing in the Nauvoo Records Index.

From this journal account it is evident that Sarah Doyle was John D. Lee's aunt, not his mother. His mother's name is Elizabeth. 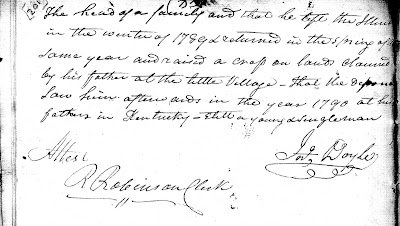 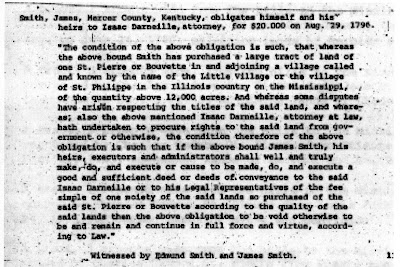 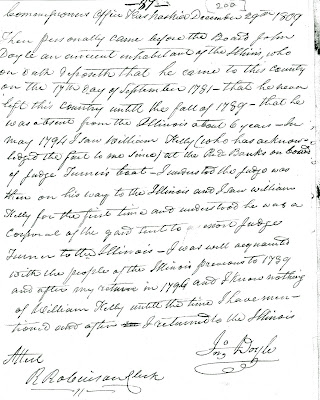 John Doyle of Illinois not married to Evaline

This is the beginning of the presentation given by Renee Durfee at the John D. Lee reunion in September 2007.

Records of John Doyle of Illinois and the other John Doyles who participated in the Revolution have been combined, creating multiple errors in genealogical information. There were at least three other John Doyles who took part in the war, a major from Pennsylvania who returned to Pennsylvania, John Dyal/Doyle who also served with George Rogers Clark and moved to Kentucky, and the John Doyle from Maryland who moved to Tennessee and married Evaline.

In order to separate the John Doyles it is necessary to identify what is known about the John Doyle who was John D. Lee's grandfather. A succinct compilation of the information available for John Doyle is given by the Illinois State Genealogical Society stating that John Doyle was buried in Randolph County, Illinois. He settled near Kaskaskia, and taught in one of the earliest schools in Randolph County. He was a scholar. He was listed in the 1810 Census of Kaskaskia. He served as a soldier with Col. George Rogers Clark.*1

It is general knowledge that he had at least two daughters, Elizabeth Doyle Reed Lee and Charlotte Doyle Conner. According to probate records in Randolph County, Illinois, John Doyle died in Randolph County in October 1819.*2 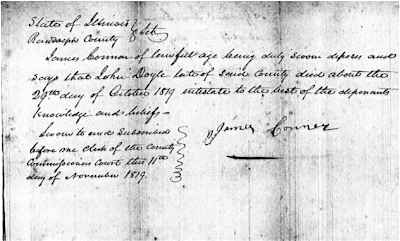 John Doyle was educated and could sign his name. This signature is taken from court records in Randolph County. 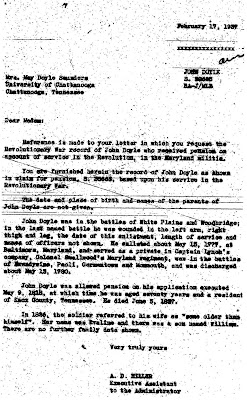 The John Doyle who married Evaline was found in Revolutionary War Pension Applications.
A summary of the information is included in this letter to May Doyle Saunders.


According to the information in the folder, John Doyle, who married Evaline, died at the age of 70 on June 3, 1837 in Knox County, Tennessee. His Revolutionary service was with Col. Smallwood's Maryland regiment. The only child listed was a son named William.

The John Doyle married to Evaline made marks for his signature instead of signing his name.*3

Because of the difference in death dates, residence, Revolutionary War service, children and signatures, John Doyle of Illinois was not the John Doyle of Tennesee who was married to Evaline.