1) Look for spouse of Henry Smith.

Henry Smith's will, found in court records of Lincoln County, Kentucky, named his current wife, Margaret, and living children. (See information under "John Doyle married Chloe Smith" proving that Henry Smith of Illinois also lived in Kentucky.) His three eldest daughters, Leddy Duff, Sarah St. Onge and Chloe Doyle were married and are not mentioned in later guardianship proceedings. The other two living children from his first marriage, Henry and Elizabeth, were over fourteen years of age and were old enough to select their own guardians, Samuel and Isham Burks.

Margaret, was assigned to be the guardian of her son Liberty Smith, son of Henry, and her son, Henry Garrett-Smith, son of Gideon Garrett. These boys were younger than fourteen, so they were assigned a guardian rather than getting to chose a guardian. When Margaret married a third time to Joseph Jones in 1791, guardianship for Liberty and Henry Garrett was changed to Henry's brothers. The two sons were still less than fourteen years old. Because Henry Garrett, Margaret's son by a previous marriage, and Liberty Smith, her son by Henry are younger than Henry's other children, this shows that Margaret was a second wife for Henry.

Henry Smith, Jr. and Elizabeth Smith were wards of Isham and Samuel Burks. Court records and the division of Henry's estate show this. 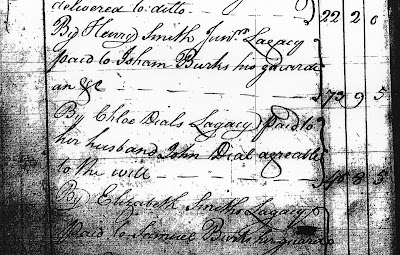 "By Henry Smith Junr Lagacy paid to Isham Burks his guardian 73.9.5
By Chloe Dials Lagacy paid to her husband John Dial agreable to the will 46.8.5
By Elizabeth Smiths Lagacy paid to Samuel Burks her guardian" 69.7.5
(amounts in pounds, shillings and pence)

In researching Samuel and Isham Burks, the guardians for Henry's middle children, it was found that they did not live in Lincoln County, Kentucky at the time, but in a more distant county in Kentucky. They must have some relationship to the family. With both of them having the last name of Burks, it was highly likely that Henry's first wife had the last name of Burks.

3) Look for Henry Smith married to a woman with the last name of Burks.

In court in Illinois, Henry Smith stated that he was a native of Virginia.

4) Look in Virginia for Henry Smith married to a woman with the last name of Burks.

Records in Botetourt County, Virginia had Henry transferring land with a John Burks. When Henry sold land, his wife was listed as Mary.

5) Look for Henry Smith in Virginia married to a Mary Burks.

The search was expanded to Bedford County, Virginia where at an earlier date, Henry was found having land dealings again with Burks.

In Bedford County a marriage record was found between Henry Smith, bachelor and Mary Birks, spinster. Because consent didn't have to be given, Mary must be of age. The security was John Partree Burks. 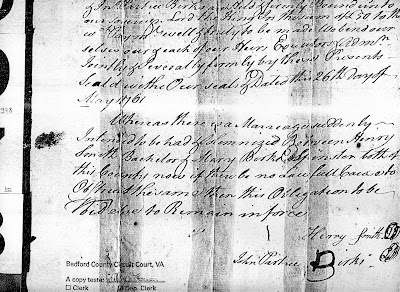 John Partree Burks died in Bedford County, Virginia, but his son John Burks was found in many of the same areas as Henry. They both lived in Botetourt County at the same time, having land dealings with each other. They were both at Ft. Jefferson on the Mississipi River at the same time. This is also an indication of family ties.

We learn information about Mary's death in the Draper Papers from correspondence between Col. John Floyd, Mary's second cousin, and Col. William Preston, a neighbor of Henry Smith's family on Pott's Creek in Botetourt County.

1781 APRIL 26 Letter from Col. John Floyd to Col. William Preston. "...and poor Henry Smith has lost his wife and almost the whole family by sickness at Illinois."

The previous letter was written on September 5, 1780.

Comparison of John Doyles who served in the Revolution

No wonder the differences between these four John Doyles has been difficult to sort out. Two came from Pennsylvania, but only one was born there, both served with Pennsylvania troops. Two were born in Virginia, two served with George Rogers Clark, but in different locations, one was born in Maryland and another was married in Maryland, two were privates and two were officers!

Note: John D. Lee and Charlotte Doyle Conner filed for a pension for John Doyle. It went to Congress, but was lost in committee. Actions taken are available in the American State Papers.

Note 2: It has long been known that John Doyle married a Smith, a daughter of Henry Smith. Charlotte and Elizabeth, John D. Lee's aunt and mother, inherited land from Henry through their mother. John D. Lee and his sister Eliza also inherited part of the land when their mother died.

Notes: There was a John Doyle from that became a Major. He also went back to and died. He had several documents in the American State Papers dealing with Congress. This could be the same person. This person could possibly have filed a pension, although it is not listed in DAR records. He was alive late enough to apply.

Pension Number: *S38665 Filed for the pension in person

This John Doyle had two wives. The first wife is unknown, but the second wife was Evaline Formwalty.

Known children for him are James, John and William. Apparently they are all children of the first wife.

Pension Number: S*W2082 He filed for the pension himself and his widow also filed.

Note: He was a Justice of the Peace and High Sheriff of Kentucky.