My mother was born in Nashville, Tennessee.

This has neither been verified nor disproved. Elizabeth was probably born in Randolph County, Illinois. Elizabeth needed to be old enough to marry Reed by 1805 and have Eliza Virginia in 1806. If Elizabeth were minimally 14 years old when she got married, she would have to be born before 1791. If she got married as early as 1799, as John D. Lee says, she would definitely be born in Randolph County, Illinois, where her parents lived from the time they were married until 1789.

John D. Lee probably got the information for his mother's birth from Charlotte. Charlotte probably was not born in Illinois, but was probably born where ever the Doyles were living after they left Illinois in 1789 and before they returned in 1796. It could have been Nashville, Tennessee, but no proof has been found of the Doyles living there.

She was the daughter of John Doyle,

Joseph Page's deposition states the relationship between John Doyle and his daughter, Eliza or Betsey. See below.

who for many years held the position of Indian Agent over the roving tribes of Indians in southeastern Illinois.

Records stating that John Doyle was an Indian agent have not been found. They are probably in Federal records.

He served in the war of the Revolution,

John Doyle was a veteran of the Revolutionary War. In Randolph County Probate Book A p. 47, is the following: "Joseph Page personally well knew John Doyle a private in the Illinois Regiment under the Command of Colonel George Rogers Clark during the revolutionary war - that his name is on the printed list of said Regiment - he died in this state about fifteen years ago leaving ifsue [issue], Charlotte wife of James Conner and Eliza or Betsey whose first husband was named (blank) Reed by whom she had one daughter Eliza, and whose second husband was Ralph Lee by whom she had one child John D. Lee who have survived her." 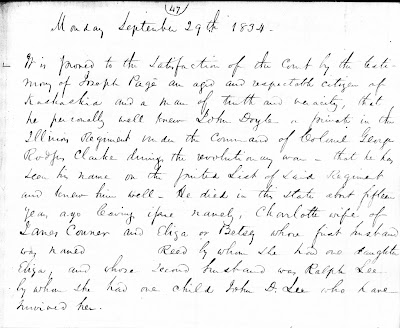 and was wounded in one of the many battles in which he took part with the Sons of Liberty against the English oppressors.

No record of John Doyle being wounded has been found. If it were a long-lasting, permanent injury, John D. Lee may have personally known and remembered that about his grandfather.

and moved to Kaskaskia, Illinois.

In 1796 John Doyle and his family returned to Illinois, and moved to Kaskaskia. (See information in blog John Doyle married Chloe Smith.) John and Chloe may have settled on property left to Chloe by her father, Henry Smith, in his will.
Posted by R Durfee at 5:50 PM